Dr. Robin M. Goldblum grew up in nearby Montgomery County and attended Upper Dublin High School. She received her B.S. in Small Animal Science from Delaware Valley College in 2001. Robin graduated from The Ohio State University College of Veterinary Medicine in 2005 and joined our staff the following July. In 2019, she won the award for Best Veterinarian in Bucks County, Pa through the Courier Times.

One of Robin’s favorite activities is writing. While in high school, she was a Gold Medal Winner of the National Scholastic Writing Contest. After taking a break from it during vet school, Robin is back to writing and published her first novel, a western horror romance called “Dangerous Kisses, Gruesome Bites.” Check it out at http://www.RobinGoldblum.com!

Robin lives with her husband Jeremy, a computer programmer. They share their home with 2 rescue dogs: “Aria” a three-legged miniature schnauzer and “Kaylar” a west highland terrier. Their son, Brayden, was born in March 2014 and twin girls, Brianna and Ilianna, arrived in April 2017.

Robin sums up her philosophy of life with two quotes:

“There aren’t any happy endings because nothing ends.” ~ The Last Unicorn 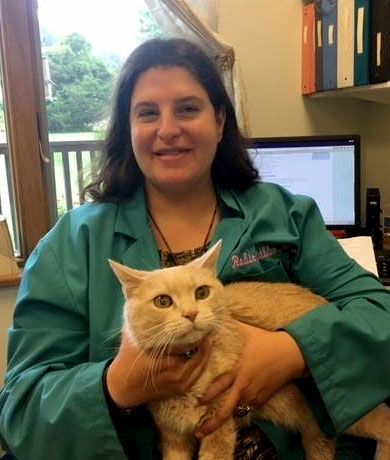